The classification of bites are broken up into three main categories: Class I, II, and III

This classification refers to the position of the first molars, and how they bite together.

Why is that important? The classification of your bite also gives an indication if a skeletal discrepancy exists. It helps us determine why the bite not fitting together properly. The position of the jaws is the bony foundation of the bite. Therefore, if the jaws are not aligned the orthodontic correction becomes more complex. 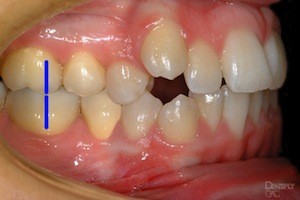 A normal bite (stripe indicates alignment of molars)
Class I is a normal relationship between the upper and lower teeth and jaws, or balanced bite. 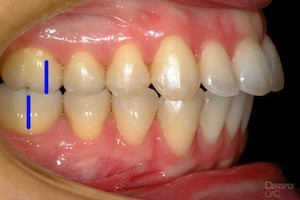 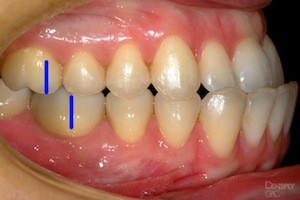 Class III is where the lower first molar is anterior (or more towards the front of the mouth) than the upper first molar. In this abnormal relationship, the lower teeth and jaw project further forward than the upper teeth and jaws. There is a concave appearance in profile with a prominent chin. Class III problems are usually due to an overgrowth in the lower jaw, an undergrowth of the upper jaw, or a combination of the two. Like Class II problems, they can be genetically inherited.

If We Made You Smile

Leave Us A Review!

Review Us on Yelp!

Review Us on Google

My teeth look fantastic. Everyone in the office did an amazing job.

I loved the Drs. and staff!

The staff is nice and I am relaxed when being treated. The braces made my teeth flawless. I am more confident to smile and laugh.

Professional and high tech office, they really know what they are doing!

I’m so happy with how my teeth look. Everyone in the office is so nice.

You Made Me Happy!

Friendly, caring, professional. Love it! I recommend Petaluma Orthodontics all the time!

I love my smile!